Top 5 Places To Go In Madrid

Full of energy and packed with cultural attractions, Madrid is a modern metropolis that offers a taste of the real Spain. Wide avenues are congested with traffic, but beautiful parks break up the urban sprawl. Madrid doesn’t have the traditional charm of Andalusia or the beauty of Barcelona, instead, it offers exciting atmosphere. The city is constantly buzzing with activity and there are so many things to see and do that tourists will be spoiled for choice. The world-class Prado Museum displays an endless array of masterpieces created during the Golden Age of Spain, and the 18th-century Royal Palace rivals the magnificent Château de Versailles. Save energy for the evening, when the city really comes to life. Madrileños love going out on the town, and the paseo por la noche (evening stroll) is a cherished ritual. If possible, avoid visiting during summer when the heat is oppressive. Spring or fall are the best times to appreciate Madrid.

A truly world-class museum, the Prado Museum has a collection of more than 5,000 paintings that rivals the Louvre collection in Paris. Spanish paintings from the 12th century to the early 19th century form the majority of the collection, and many are famous masterpieces. The assortment of paintings by Francisco de Goya includes a remarkable 140 works. The collection also covers Italian, Flemish, French, British, and German paintings as well as Neoclassical Italian sculptures.

The Prado Museum displays around 2,300 pieces of the collection in more than 100 rooms on three floors. Trying to see it all in one visit can be daunting, but it’s possible to focus on a specific itinerary of masterpieces. The Prado suggests “routes” (self-guided tours) of specific works. These routes showcase the most renowned pieces in the collection including the famous painting of the Prado, Las Meninas. This magnificent painting of the Spanish royal family of Felipe IV was created by Velázquez in 1656. Other must-see works among the museum’s top 50 masterpieces include the The Annunciation by Fra Angelico, Christ Washing the Disciples’ Feet by Tintoretto, The Descent from the Cross by Rogier van der Weyden, Jacob’s Dream by José de Ribera, The Third of May by Goya, The Immaculate Conception by Murillo, the Self Portrait by Dürer, Adoration of the Shepherds by El Greco, Parnassus by Poussin, and The Garden of Earthly Delights by Bosch.

Visitors can also opt to use the museum’s audio guide (for a small fee), which includes a tour of 50 masterpieces. Diehard art lovers can select the full-version audio-guide tour that covers 250 works. Tourists will also appreciate the museum’s gift shop and the café with a pleasant outdoor terrace. In association with the Prado Museum, the Church of San Jerónimo el Real behind the museum displays a noteworthy collection of 17th-century Spanish religious paintings.

Get the most out of your time at the Prado by joining a Skip the Line: Prado Museum Tour in Madrid, avoiding the long lines and going directly to the most important works of art. On the 90-minute tour, the guide, an art expert, not only points out the most significant pieces in this mind-boggling collection, but relates their backstories and some history to put the art in context.

The Buen Retiro Park (Parque del Retiro) is an oasis of peace in the heart of Madrid. Just beyond the busy streets, this lush 120-hectare park offers an escape from the hustle and bustle of the city. Created for the Count-Duke of Olivares in the 17th century, the historic park has an elegant ambience with its lovely landscaping and tree-lined paths. From the main entrance at the Plaza de Independencia, visitors arrive at the pool in the center of the park. From here, paths lead to the enchanting Rosaleda (Rose Garden) and the formal French Jardín de Don Cecilio. The Palacio de Cristal (Crystal Palace), a splendid site with its graceful fountain and reflecting pool, often houses art exhibitions. Visitors will find other interesting fountains including Los Galápagos (The Turtles), El Ángel Caído (The Fallen Angel), and La Alcachofa (The Artichoke).

A pleasant pastime among locals is sitting at one of the park’s open-air cafés, while basking in the sun or relaxing in the shade according to the season. For stargazers, the park has an observatory that was built in 1790.

This grandiose palace is the Spanish version of Versailles, a royal court designed to impress. Rising above a steep slope overlooking the lush gardens, the palace is built entirely of granite and white Colmenar stone. The palace was commissioned by Philip V in the 18th century. The majestic Neoclassical facade features Ionic columns and Doric pilasters, based on drawings that the sculptor Bernini originally intended for the Louvre in Paris. The balustrade features statues of Spanish kings.

The most striking feature of the interior is the imposing staircase at the entrance hallway, with a fresco of The Triumph of Religion and the Church, that leads up to the main floor. The King Charles III apartments are among the beautiful rooms in the Royal Palace. A masterpiece of Rococo style, the Salon de Gasparini features graceful chinoiserie, an intricately patterned marble floor, and carefully matched silk wall hangings. The Salón del Trono (Throne Room) is adorned with frescoes by Tiepolo including The Greatness of the Spanish Monarchy, one of his finest works. Still used for State ceremonies, the Throne Room is clad in sumptuous red velvet and decorated with valuable tapestries, mirrors, furniture, and chandeliers. Throughout the palace masterpieces of art decorate the walls: paintings by Velázquez, Goya, Rubens, El Greco, and Caravaggio, and exquisite Flemish and French tapestries. History buffs will want to visit the palace’s Royal Armory, which contains 3,000 exhibits dating back to the 16th century. Behind the palace, and a good place for quiet strolls, are the Sabatini Gardens, formal beds and hedges laid out in the geometric Neoclassical style, with fountains, statues, and a pool.

This elegant 17th-century plaza was built during the reign of Philip III. The Plaza Mayor was a center of commerce and municipal life, as well as the scene of ceremonial events such as the proclamation of a new king and the canonization of saints. The square also served as a venue for bullfights, dramatic performances, and knightly tournaments. The plaza took on its present appearance after a fire in 1790, when the corners were enclosed and the nine entrance arches were constructed, linking it to Calle de Toledo, Calle Mayor, Calle Postas, and others.

Today, the Plaza Mayor continues to be an important gathering place in Madrid. The expansive cobblestone square is a pedestrian area, surrounded by outdoor cafés and atmospheric restaurants shaded by its arcades. Strolling here or sitting in its cafes is one of the most popular things to do in Madrid at night, for both tourists and Madrileños. 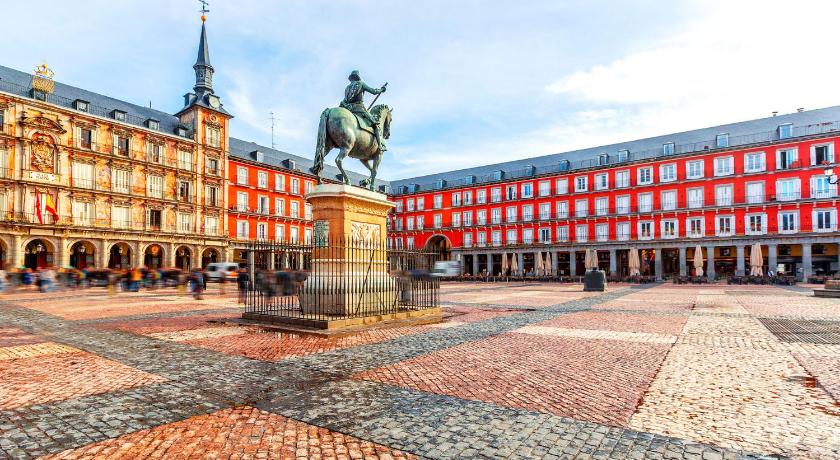 5 Puerta del Sol: The Heart of the City

The Puerta del Sol was named after the sun emblem on the old city gate, which formerly stood here. This spacious town square aligns with the rising sun. Besides being a hub of public transportation (with several bus stops and Metro entrances), the Puerta del Sol is also the “Kilometer Zero” point from which all distances on the Spanish national road network are measured.

The Puerta del Sol has been the scene of many historic events, including the Spanish resistance to Napoleon on May 2nd 1808, and in 1931, the Second Republic was proclaimed here. Nowadays the square is a place to hang out and enjoy life. Lined with shops and cafés, the Puerta del Sol is still one of the liveliest squares in Madrid. Just off the Puerta del Sol is Madrid’s largest department store, El Corte Inglés, which sells everything from clothes, shoes, and swimsuits to traditional Spanish fans. Also nearby is La Violeta, an old-fashioned confection shop that offers the Madrid specialty of violet candies.

Study: Cancer cases likely in those exposed to atomic test